About 177 AD the Greek philosopher Celsus, in his book ‘The True Word’, expressed what appears to have been the consensus Jewish opinion about Jesus, that his father was a Roman soldier called Pantera. ‘Pantera’ means Panther and was a fairly common name among Roman soldiers. The rumor is repeated in the Talmud and in medieval Jewish writings where Jesus is referred to as “Yeshu ben Pantera”. 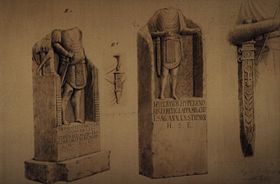 Pantera's gravestone is the one on the left

In 1859 a gravestone surfaced in Germany for a Roman soldier called Tiberius Iulius Abdes Pantera, whose unit Cohors I Sagittariorum had served in Judea before Germany – romantic historians have hypothesized this to be Jesus’ father, especially as ‘Abdes’ (‘servant of God’) suggests a Jewish background.

The gravestone is now in the Römerhalle museum in Bad Kreuznach, Germany.

It appears this First Cohort of Archers moved from Palestine to Dalmatia in 6 AD, and to the Rhine in 9 AD. Pantera came from Sidon, on the coast of Phoenicia just west of Galilee, presumably enlisted locally. He served in the army for 40 years until some time in the reign of Tiberius. On discharge he would have been granted citizenship by the Emperor (and been granted freedom if he had formerly been a slave), and added the Emperor’s name to his own. Tiberius ruled from 14 AD to 37 AD. Pantera’s 40 years of service would therefore have started between 27 BC and 4 BC.

As Pantera would probably have been about 18 when he enlisted, it means he was likely born between 45 BC and 22 BC. He could have been as old as 38 or as young as 15 at the time of Jesus’ conception in the summer of 7 BC.

In 6 AD when Jesus was 12, Judas of Galilee led a popular uprising that captured Sepphoris, the capital of Galilee. The uprising was crushed by the Romans some four miles north of Nazareth. It is possible (and appealing to lovers of historical irony) that Pantera and Joseph fought on opposite sides. As Joseph is never heard of again he may well have been killed in the battle, or have been among the 2,000 Jewish rebels crucified afterwards.

So Tiberius Iulius Abdes Pantera is indeed a possibility as Jesus’ father. The only thing we know for certain is that Mary’s husband Joseph wasn’t the father, and that Mary was already pregnant when they married. It could have been rape, or Mary may have been a wild young teen who fell for a handsome man in a uniform, even if he was part of an occupying army. It happens.