It took the West how many centuries to resolve Catholicism vs Protestantism vs secularism? And it’s not entirely resolved yet. So the Muslim world may have a couple of centuries to go before it sorts itself out.

The more accurate guide to the future

I was going to write about the future of intelligence but I just saw a nice graphic by The Economist on the spread of ISIS: 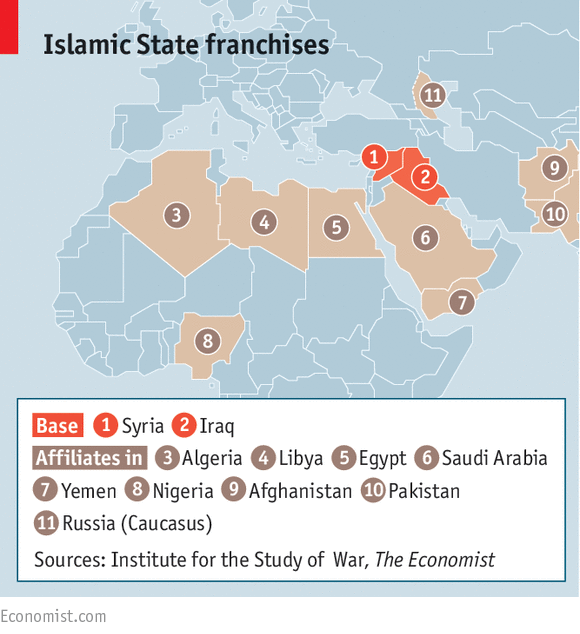 so I’ll write about them instead.

The main Economist article is http://www.economist.com/news/middle-east-and-africa/21656690-islamic-state-making-itself-felt-ever-more-countries-how-much-influence

I won’t summarize their article about the current state of affairs; read it yourself. I can add a few comments to highlight the future though.

Surveys on Muslim attitudes to violence consistently show that most Muslims reject violence done in the name of Islam: 65-75%. That is the numeric range that describes the reality of ‘the vast overwhelming majority of peace-loving Muslims’ we see emphasized by politicians and media whenever an Islamic terrorist act occurs, two thirds to three quarters according to when and where the surveys have been done. The last high quality survey in the UK arrived at the figure 68%, comfortably in that range. The other side of the same statistics is that 32% of British…