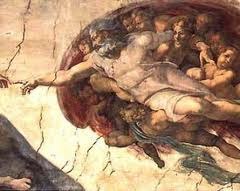 Monotheism results in a very focused society, with absolute values and unquestioning support – until a flaw appears, opposition appears, and war breaks out. Monotheism is inherently hostile to democracy and free choice.

It is easier to manage a theocracy for a population that is ethnically and culturally homogenous. The wider it grows, the more allowances have to be made, and the faster the monotheism erodes. The most effective monotheisms are cults operating in isolated compounds.

Polytheism allows the possibility of behaving in different ways, each way being appropriate for a different god. Those who want to worship Venus are not forced to live by the standards of those who worship Mars.

This advantage allows a political structure that is not limited by a single religious practice to spread across unrelated cultures, adopting their gods into the pantheon of the rulers. This was part of what allowed the Roman Empire to spread so successfully, bringing the worship of Isis in to Rome as well as the worship of Jupiter out to conquered provinces. The decline and fall of the Roman Empire is connected to the replacement of polytheism by monotheism, as Gibbon pointed out.

Polytheism is not all peace and love, however. Where there is no consensus on correct social norms, war cults will want to act in a warlike fashion. Male-only cults will make life hard for women. Patrician cults will formalize aristocracy and slavery.

Mono- or poly-, it’s the theism that is the problem. Matthew, in The Gospel According to the Romans, is an interested but skeptical observer of the religions swirling around the Roman Empire.

3 comments on “Monotheism and Polytheism – pros and cons”