We think, with some justification, of the Greeks as thinkers and the Romans as doers. This doesn’t mean the Romans were ignorant. They commonly used Greek slaves as teachers for their children, and Greek learning was known to educated people throughout the Roman Empire – partly because the Greeks themselves lived throughout the Empire. The Ptolemys ruling Egypt, who included Cleopatra, were Greeks. 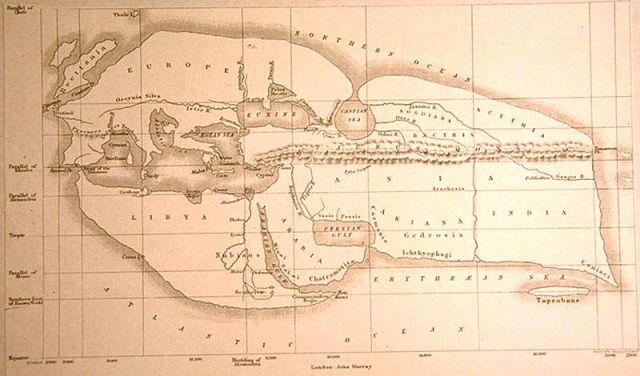 Reconstruction of Eratosthenes' map of the world

According to the history books, it was the Greeks who first suggested that our earth is a sphere. Aristotle argued this in On the Heavens around 340 BC. First, you always see the sails of a ship coming over the horizon first and only later its hull, which suggests that the surface of the ocean is curved. Second, he realized that the eclipses of the Moon were caused by the Earth casting its shadow on the moon. Third, the Greeks knew that the North Star appears higher on the northern firmament and lower in the south. Aristotle explained this correctly with the parallactic shift that occurs when moving between two observation points on a spherical object. Separately, the idea that the sun rather than the earth was the center of the universe was proposed by the Pythagoreans and by Aristarchus of Samos around 270 BC. (However, Aristotle dismissed the idea of this heliocentrism.)

Around 240 BC Eratosthenes (Libyan-born, living in Alexandria in Egypt) calculated the circumference of the earth; he knew that the sun was directly overhead at Aswan on the summer solstice; he observed from the shadow of a vertical pole that on that day the sun was a fraction over 7 degrees off from vertical in Alexandria (almost due north of Aswan); and, from generations of Pharaonic surveyors, he knew the distance between the two places: 5,000 stadia. He gave the earth’s circumference as 252,000 stadia. Depending on whether he meant the standard Greek stadium or the Egyptian stadium, he was accurate to within either 16% or 2% of the earth as it is.

He also calculated the distances to the moon and to the sun, and was reasonably correct about the moon (and possibly extremely accurate about the sun). Having created the armillary sphere when he was 20, and originated the term “geography”, and created a useful map of the known world, he still had time to be an athlete and a poet.

Uneducated people 250 years later in Palestine thought that a bright star had moved across the sky and stayed over the house in Bethlehem where a certain child was born. For them, the heavens were the physical abode of God and his messengers, a mile or two above the earth, up in the clouds with the sun, moon and stars.

Well-educated Greeks and Romans were beyond such nonsense.

6 comments on “What the Romans knew of the Universe”