Bertrand Russell introduced the idea of claiming that there is a teapot in orbit around the sun somewhere between the Earth and Mars, as an example of an idea that cannot be refuted but which is not necessarily true. As he was writing before Sputnik and Gagarin, let alone before human debris in space, the idea was nonsensical but beyond the power of technology to disprove. 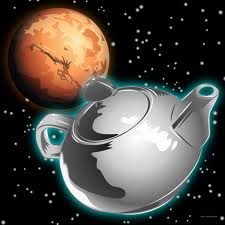 (In time, we will develop the technology to map the solar system down to the level of orbiting teapots… and my guess is that by that time mischievous humans will indeed have launched one.)

The fact that Russell’s Teapot could not be disproved did not mean that it was a fact. A few years later he elaborated: “I do not think the existence of the Christian God any more probable than the existence of the Gods of Olympus or Valhalla. To take another illustration: nobody can prove that there is not between the Earth and Mars a china teapot revolving in an elliptical orbit, but nobody thinks this sufficiently likely to be taken into account in practice. I think the Christian God just as unlikely.”

Why a teapot? Russell was born in 1872. He was known to have been fascinated by the works of that other mathematician and logician, Lewis Carroll. In Alice In Wonderland, the Mad Hatter sings a parody:

“Twinkle, twinkle, little bat/ How I wonder what you’re at./ Up above the world you fly/ Like a teatray in the sky.”

I propose that this is the origin of the celestial teapot. In fact, I believe that it is. The idea is irrefutable. (Can I therefore require that you believe it too?)