Christians say Jesus was dead and buried for three days. But Friday night to Sunday morning is only a day and two nights. A tour operator trying to sell that package as ‘three days’ would be prosecuted. So what’s up with the Christians? 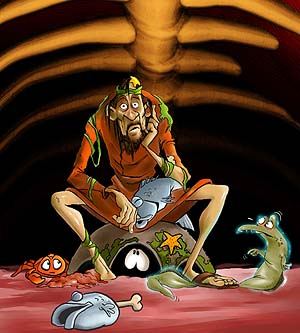 Jonah, three days and three nights in the belly of the great fish

A case can be made for the Roman practice of inclusive numbering. They would have said our week was eight days, running from Sunday to Sunday. They based their own week on the public market day which was held every eighth day throughout the Roman Empire, and they therefore said the week was nine days. They were brilliant engineers, but not strong in pure mathematics.

However Roman numbering doesn’t deal with the issue of Biblical prophecy. Christians are at pains to say that Jesus was correct in all his prophecies. Here is the prophecy by Jesus that causes them to say he was buried for three days:

Christians will wriggle and wriggle to claim that late Friday plus Saturday plus early Sunday equals three days, but there is no way they can find the necessary three nights.

Clearly, if Jesus was prophesying about himself, a Sunday morning resurrection fails to meet the criteria. He failed to stay under long enough.

Sorry, but the claim of accurate prophecy must be disallowed.