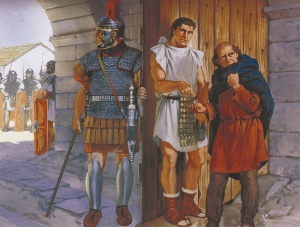 Chapter 1 of “The Gospel According to the Romans” introduces key factors regarding the social structure and day-to-day environment of 1st century Palestine: Palestine was a province of the Roman Empire and, as such, was under the military occupation of a Roman Legion. The figurehead ruler might be a local king, but real power rested with the Roman governor.

Palestine was unique in the Empire in having only one local god, and this god was considered superior to all other gods, to the extent that Jews were not allowed to worship any but Yahweh. Normally the Romans just added the local gods to their own pantheon and expected the natives to allow the worship of Roman gods alongside their own. This was not acceptable to religious Jews.

So the local leaders had to choose between four approaches to the Romans: that of the Sadducees – active collaboration, favored by the wealthy, powerful and venal; of the Pharisees – resentful acquiescence while ignoring sacriligious Roman factors like pigs, shaved chins and graven images; of the Essenes – retreat from Roman influence into remote, self-sustaining and traditional communities; and of the “Fourth Philosophy”, the Zealots – armed resistance, assassination, robbery, and province-wide uprisings.

But not all Jews were religious. The novel’s protagonist, Matthew Levi, was born and raised in another province, Syria, and has long been friends with individual Romans. Chapter 1 sees him interviewed by the governor, Pontius Pilate, for a position as tax collector in Capernaum. As the Roman agent in a small town he will also be expected to send reports about any anti-Roman sentiment or activities he hears of. In effect, any tax collector will be a spy.