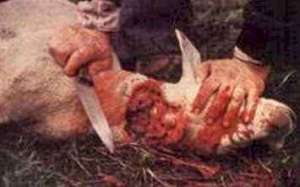 And don’t piss Him off! He has been known to curse all humanity for all eternity for eating an apple. He once wiped out all of humanity – again, every man, woman and child – except for Noah and his immediate family. He has destroyed individual cities in a fit of anger.

He’s no different from any other nightmare monstrosity from humanity’s Stone Age past, a manifestation of all that is brutal and random in the Universe, a Universe that can send lightning and meteorites from the sky to devastate the earth.

And He must be appeased the only way that humans know to appease a violent bully who randomly inflicts torture – give Him anything He wants… and if you can’t find Him, give His friends whatever they tell you He demands.

Give, donate, tithe, sacrifice… because otherwise, He will take it in blood. And His friends tell you that then He will be happy.

No different from the pre-Biblical flood story in the Epic of Gilgamesh. When Utnapishtim (the Noah figure) finally lands his boat on the mountain and lets all the animals out, the first thing he does is burn things in sacrifice.

Well, at least it’s only one God that monotheists have to appease these days… But on the other hand, there’s no longer anyone to keep Him in check.