It’s normal for the founder of a new religion to produce a new code of laws. After all, the founder isn’t content with the existing social situation, or he (and it’s usually a he) wouldn’t feel the urge to create something different. The new religion will require a new definition of god/ess/es and a new definition of the appropriate and/or mandatory ways to worship them and beg things from them. 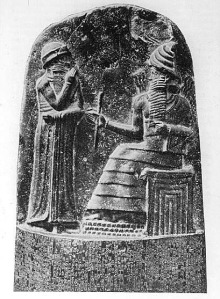 New god(s), therefore new liturgy, new rules regarding purity… cleanliness… then food… food preparation… and of course clothing… and now we’re into the regulation of sexual relations… marriage… penalties for disobedience… Pretty soon you’re instituting the death penalty for adultery, then regulating marketplace weights and measures, and standardizing the length of cart axles so that the wheels always fit the ruts in the road.

It may not be necessary to create a whole new religion if your interest is just the laws. Especially if you have a pantheon of gods to choose between, you can simply shift the emphasis from one to the other, as Moses did in suppressing the worship of Ba’al and other gods in favor of Yahweh. But then, Moses may not have written all of those laws – it appears they kept getting added to for hundreds of years, the authors always attributing the additions to Moses attributing them to Yahweh.

Several centuries before Moses, various rulers in the area of modern Iraq such as Ur-Nammu and Hammurabi provided extensive written laws. They too invoked the gods as the true creators of the laws, increasing the authority of the laws and enhancing the status of the ruler.

So it’s an apparent anomaly that there was no new and extensive written code of laws with the birth of Christianity – neither from Jesus nor from Paul.

But Jesus had no interest in starting a new religion – he was a Jew who was trying to get all other Jews to turn back to the old ways, back to the Shema (“Hear, O Israel…”), and away from the polluting Romans.

And Paul, though he wanted to start a new religion, had no interest in new laws because he was intent on starting this new religion within the existing framework of the Roman Empire. The Romans didn’t look favorably on people who tried to override their laws.

So Christianity started out without any clear legal definition, only the tension of trying to adhere to the very different Mosaic and Roman legal structures simultaneously…

And then a few hundred years later we get Muhammad, and we’re back to divinely inspired legislation.