Five closely related Egyptian Pharaohs shared two unusual traits – each had unusually feminized figures (large breasts and large hips), and each died young (and in fact younger than the preceding one). The former trait is suggestive of epilepsy, and the latter of a hereditary disorder. The five are Tutankhamen “the boy king”, his probable father Akhenaten, his possible uncle Smenkhkare, and before them Amenhotep III and Tuthmosis IV. 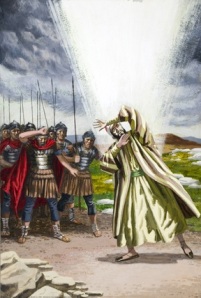 In addition, two of them had powerful sun-related religious experiences: Tuthmosis IV in the middle of a sunny day, as detailed in the Dream Stele  inscription near the Sphinx in Giza; and Akhenaten, who elevated the minor sun-god Aten to be the supreme god, replacing Egyptian polytheism with what was probably the world’s first monotheist religion – the first of national significance, anyway.

Of the 40 kinds of epilepsy, the one that fits best is Temporal Lobe Epilepsy, in which seizures can be triggered by sunlight. Common symptoms include a compulsion to write, fainting, extreme religiosity, and obsessive compulsive disorder.

Akhenaten, the creator of monotheism had it. Others suspected of it include Moses, almost certainly St. Paul (who was termed epileptic by contemporaries, and whose conversion on the road to Damascus would be a classic example of such a seizure), and definitely Dostoevsky.

There has long been a recognized association between monotheism and the desert’s all-powerful sun, as there is between polytheism and the lush diversity of sun-shaded forests. And it seems that epilepsy is another component of the development and spread of the idea of the One God.

If only they’d had shades in those days, think how much grief we could have avoided!