Into the land for which the Jews
A thousand years before
Had killed and burned to take,
Jesus was born.

Walking four miles from Nazareth
To Sepphoris with Joseph at age ten
To work and help his father build another
Roman Jewish palace,
Jesus toiled.

In the uprisings led by Judas of Galilee
When Joseph and two thousand Jews were killed,
Crucified by the Romans, Sepphoris burned,
Jesus escaped.

Outside the shining city on the hill,
The Passover uprising crushed by Rome,
Flanked by two Zealots, heads of the revolt,
Jesus, King of Jews, was crucified.

Seeing an opportune new power base,
Mixing old Jewish myths in a fresh blend
With Mithras, Isis – a One God for all –
Saul/Paul created Christ as a new God.

The Antonia Fortress falls to the Romans, 70 AD

Both fundamentalist and Paulist Jews
Denying the Emperor’s divinity –
Disrupting commerce, peace and government –
Nero burned Jewish Christians, and
Titus destroyed the Jewish Temple, and
Hadrian deported all the Jews
From Palestine, scattering Christians and Jews
Throughout the Roman Empire and beyond.

Jews kept their heads down. Christians evangelized,
Spread through the powerless – slaves, women, poor,
Criminals and the lowest army ranks.

(Jesus gives no opinion, being dead.)

This blog is a marmalade – sweet and sour boiled together, both rind and juicy bits. 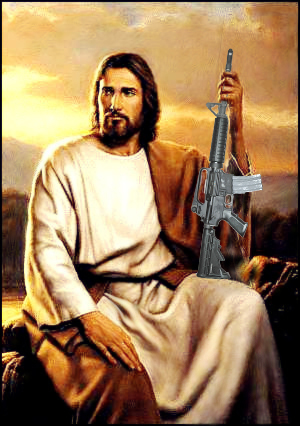 Jesus was not a pacifist.

By the way, it’s also a blog for the novel itself. With links to the trade paperback and to the Kindle edition. But don’t expect to find all the blog’s ideas in the novel – it’s just a contrarian (realistic, commonsense) retelling of an old story from the point of view of, yes, the Western occupation. And yes, Jesus was crucified. No, he didn’t come back from the dead. So, do you want to see how he did all those miracles?

I’ve previously posted about the key Jewish commandments, reviewed by Jesus to his followers, to obey the Shema (“Hear, O Israel…” Deuteronomy 6:4-9) and treat all “the children of thy people” well and “love thy neighbour as thyself” (Leviticus 19:18). The two greatest commandments are to obey the tribe’s God, and to be good to the tribe’s people. 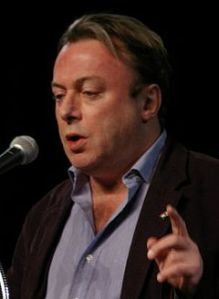 Christopher Hitchens has a lovely 8-minute video in which he reviews and and updates the Ten Commandments for our time. But Hitch missed the question of who is your ‘neighbor’ (“Thou shalt not covet thy neighbor’s house”, etc – “Thou shalt not bear false witness against thy neighbor”…) Neighbor means fellow Jews. It is all very tribal. That’s why it was fine for Moses to say “God says Thou shalt not kill” and then to go out slaughter the men, women and children of Palestine, now that God had given the Promised Land to the Children of Israel.

There are universal religions, and there are tribal religions. The Romans understood the former, and tried to draw in every local religion they conquered. Judaism, the religion of Moses and of Jesus, was and is tribal, and in the time of Jesus it was bitterly opposed to being swallowed up by Roman syncretism.

The land promised to Abraham by his god (in exchange for exclusivity of worship) was “from the river of Egypt to the Euphrates”. In modern terms this includes not just Israel/Palestine, but Lebanon, Syria, Jordan, Kuwait, half of Iraq, a large part of Egypt, and an undefined part of Saudi Arabia. (You could even argue that it includes the entire Arabian peninsula, as falling within the coast between the Euphrates and Egypt.) 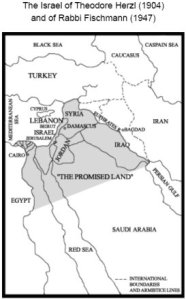 Map of the Promised Land as defined in Deuteronomy

If you don’t think that fundamentalist Jews and Messianic Christians believe in such a massive expansion of Israel, look at this map on this website.

If you don’t think that the Arabs are aware of the fundamentalist Jewish vision, then look at this blog. This blog includes references to Jews claiming the full territory in the writings of Theodore Herzl and in 1947 testimony to the UN.

And notice that they are using the same map (misspelling ‘Caspian’, and showing Israel as including both Lebanon and the Sinai peninsula). How nice that they can agree about something.

Of course, only a very few Jews and Christians make these preposterous claims to own the whole “Promised Land”. Similarly, only a very few Muslims want to eradicate the state of Israel. Most people on both sides, as most people everywhere, simply want a better life for themselves and their children, and to feel that they are living in a fair and just world. As the bumper sticker says, “If you want peace, work for justice.”

Of course, a whole lot of people were already living in the Promised Land when Moses showed up with the Children of Israel. It was good land.

According to Moses, GOD had two sets of rules for warfare with cities, depending on whether the target cities were outside the Promised Land (“very far from you”), or inside it (“cities of the nations here”).

For the first ones, GOD says, offer them peace as slaves. If they accept, enslave them. If they don’t accept, then besiege the city, capture it, kill all the males, and keep the women and cattle as booty. You can afford to be this generous, because it’s outside the Promised Land.

But if the city is inside the Promised Land, you have to kill everything – men, women, children, animals – “in order to prevent them infecting you with their immoral practices”. I kid you not. 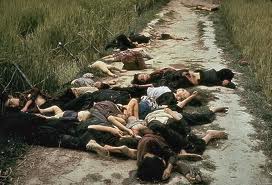 "You shall save alive nothing that breathes."

[10] When you draw near to a city to fight against it, offer terms of peace to it.
[11] And if its answer to you is peace and it opens to you, then all the people who are found in it shall do forced labor for you and shall serve you.
[12] But if it makes no peace with you, but makes war against you, then you shall besiege it;
[13] and when the LORD your God gives it into your hand you shall put all its males to the sword,
[14] but the women and the little ones, the cattle, and everything else in the city, all its spoil, you shall take as booty for yourselves; and you shall enjoy the spoil of your enemies, which the LORD your God has given you.
[15] Thus you shall do to all the cities which are very far from you, which are not cities of the nations here.

Having got control of Palestine for 1500 years through genocide and ethnic cleansing, religious Jews (including Jesus, obviously) were in no mood to have the idolatrous, polytheist, pig-eating Romans come in and run the country. Their duty was to wipe the Romans out.

Unfortunately that thinking is still alive today among religious Jews. Even if Palestinians are neither idolatrous nor polytheist nor pig-eating, the more fanatical among the Jews do not see them as worshiping the same God, and want to wipe them out. But God is said to have promised the land to the descendants of Abraham – and Arabs, too, claim descent from Abraham. So the promise of the Covenant is fulfilled if Jews or Arabs live in the Promised Land… from the river of Egypt to the Euphrates.

Let’s assume that, as in the previous two blog posts, Jesus told his followers to obey the Shema (“Hear, O Israel…” Deuteronomy 6:4-9) and treat all “the children of thy people” well and “love thy neighbour as thyself” (Leviticus 19:18).

One question that arose was, Who is my neighbor? The uncertain boundary for Jesus appears to be the Samaritans – followers of a slightly different version of Mosaic Law, and without loyalties to Jerusalem or its Temple. Not Jews exactly, but almost… and living in the Jewish heartland, halfway between Jerusalem and Galilee, so that Jews and Samaritans inevitably went through each other’s territories. 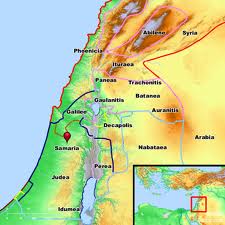 Samaria, the region halfway between Galilee in the north and Jerusalem in the south

Although the Samaritans were not receptive to Jesus’ focus on the Temple at Jerusalem, he considered a charitable Samaritan to be closer to God than an uncharitable Jewish priest or Levite.

In some ways, the Samaritans appear to be in a very similar position to the Palestinians of today – monotheists, claiming descent from Abraham, respecting the Torah but following slightly different traditions, with their own non-Jewish holy sites, and with a historical right to live where they live, regardless of what Jewish fanatics think.

And in fact, some of the Palestinians of today are Samaritans. Some 700 live at Mount Gerizim and in Tel Aviv. 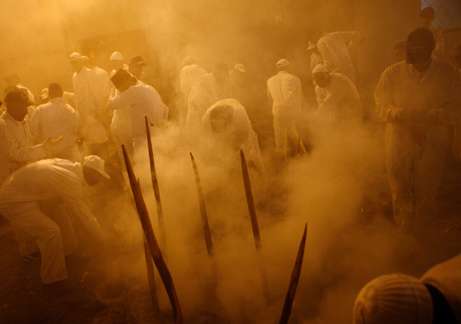 Mount Gerizem, West Bank, April 19, 2008. Samaritans gather around fire pits as sacrificed sheep smolder during a ritual of Passover, the annual Jewish holiday marking the liberation of Hebrews from slavery in ancient Egypt.