Jesus said that the two greatest commandments from God were the Shema, and to treat your fellow Jews well. When a rich young man told him (Matthew 19: 20) that he had followed these – and the Ten Commandments, and in fact all of God’s commandments – and asked what he had to do to gain eternal life, Jesus did not, repeat NOT, say anything like “Accept me as your Lord.”

Jesus said “Sell everything, give it to the poor, and follow me.” 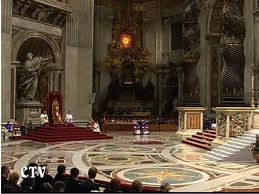 The Pope on his thrones in his palaces thinks he is poor.

In ‘The Gospel According to the Romans’ the words would carry a different nuance: “Sell everything, give it to the Zealots, and join the insurrection against the Roman occupation.”

In any case, the young man went away sadly, because he was rich. That was when Jesus made his remark about it being easier for a camel to go through the eye of a needle, than for a rich man to get into Heaven.

And no matter which interpretation of Jesus’ words is correct, it is hard to imagine either the Pope or any televangelist being allowed in at the pearly gates.